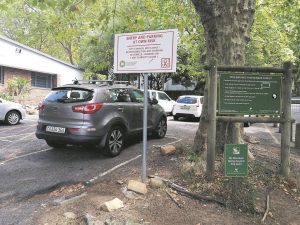 The Newlands Forest parking lot has been flagged as a crime hotspot. SANParks says these parking areas does not fall under its jurisdiction. PHOTO: Nettalie Viljoen

With out of motor vehicle (MV) theft still the dominant crime type reported in Claremont, police have asked the public to be extra vigilant when it comes to parking and locking their cars, and, most importantly, not to leave any items inside.

According to Lt Col Marnus Fourie, Claremont Vispol commander, the Claremont precinct has seen a 50% decrease in theft out of motor vehicle figures over the past decade, with particularly low and stable figures for the past two financial years. However, Fourie states, although a marginal year-on-year increase from 2020-’2021 to 2021-’2022 was recorded (only a 20-case difference), the spike in the second half of last year is concerning.

He says criminals are continuing to target vehicles parked in the Newlands Forest parking lot, the M3 and other adjacent, secluded roads.

Fourie says there are two types of theft out of motor vehicle: opportunistic and organised.

“In the first instance, the vehicle’s window is smashed and the car is ransacked for any items to steal, irrespective of value, and even if hidden in the boot or under the seats. The second involves remote jamming. Suspects block the signal when a complainant attempts to lock his motor vehicle. The car doesn’t lock and the contents of the vehicle are quickly and easily removed.”

In March, People’s Post reported that the influx of street people in Claremont these past two years had been linked to an increase in crime in the area, with Claremont police urging residents to adopt responsible giving.

A media statement released by the Claremont police and Claremont Community Policing Forum (CPF) earlier this month stated that the relaxation in lockdown regulations, together with the advent of the warmer summer months, saw a further rise in the number of street people living in the suburb. This, the statement said, had led to an increase in pedestrian activity on Claremont’s streets.

Fourie says “a staggering number” of homeless people and bin pickers are opportunistic criminals who have been positively linked to some of the cases.

“Theft out of motor vehicle and street robbery are the most prevalent crimes referred to, but the problem extends beyond that. With (homelessness) comes drug and alcohol abuse, making behaviour volatile and unpredictable,” says Fourie.

Jane Chamberlin, spokesperson for the Claremont CPF, says while it must be acknowledged that the City of Cape Town is working hard to address homelessness, provide social support and restore public spaces across the city, residents supporting door-to-door charity are attracting hundreds of people to Claremont.

“This ‘generosity’ in Claremont is soliciting an inpouring of (homeless), opportunists and gang members from Manenberg, Hanover Park, Mitchell’s Plain, Muizenberg and other areas. Claremont police have confirmed that most crime in Claremont can be directly attributed to (homeless people),” says Chamberlin.

“It is only our collective effort that will stop these crimes from escalating to more serious – and potentially dangerous – levels,” says Chamberlin.